There are not many episodes to which you can point and say with absolute confidence that they changed history. Or maybe that’s rubbish: perhaps every episode changes history to a degree – but you know what I mean. The Great Suffrage Pilgrimage, which lasted for six weeks during the early summer of 1913, was one such occasion. An Awfully Big Adventure, it marked the end of the British public’s disenchantment with militant suffragettes and the political realisation that the Vote was something ordinary women not only wanted, but needed and deserved. The Pilgrimage gave women a voice; a dignified, unified, determined and spirited voice which for once, was not drowned in derision. That’s quite something.

As readers of this shamefully sporadic blog will be aware, the Great Pilgrimage really gets me going. Hardly anyone knows about it now; few credit its marchers with playing any significant part in the struggle for the Vote, and people simply don’t realise what an extraordinary odyssey it was both personally and politically. You wouldn’t believe some of the stories I’m uncovering about its characters and their experiences on the road in the course of my research for ‘Hearts and Minds’…

However I’m so glad that in my enthusiasm for the ‘gists’ I decided not to ignore the ‘gettes’, despite my feeling that their part in the fight is a little over-exposed. As if one could – or should – ignore them. I made the arrogant mistake at the beginning of this project of thinking that everything we needed to know about the suffragettes was already out there. Wrong again: through talking to family members, reading first-hand accounts, listening to oral histories, I’m picking up details about the militants which have suddenly made them human, rather than cyphers. I don’t mean that I’ve realised the depth of their emotions (anyone who’s seen the film Suffragette will appreciate that) but I now know that they were brave, inventive, terrified, terrifying, and incredibly resourceful individuals. (If you ever guess what they used for a football in the prison exercise yard at Holloway, I’ll be astonished.)

I’m so enjoying my research. Travelling all over the UK and beyond – it’s the United States next week – has been exhausting but exhilarating. We should be intensely proud of our grandmothers, great grandmothers and their friends, whether they were peeresses or mill-hands, and of the men who supported them, for risking reputation, health, even life with such conviction and general good humour. Even grace.

Back to the Great Pilgrimage. I’m tempted, once centenary year comes round in 2018, to organise a smaller-scale march to commemorate my heroines. Maybe not with horse-drawn caravans packed with supplies of cake and copies of the Common Cause, and maybe not in long hot skirts caked in mud and hats bristling with pins (useful for prodding over-familiar or abusive hecklers), but in the same spirit as the original one. A crusading spirit, that is, of sisterhood, mutual support, hope and utter certainty that once women are free to make their own decisions, the world will be a better place for us all. 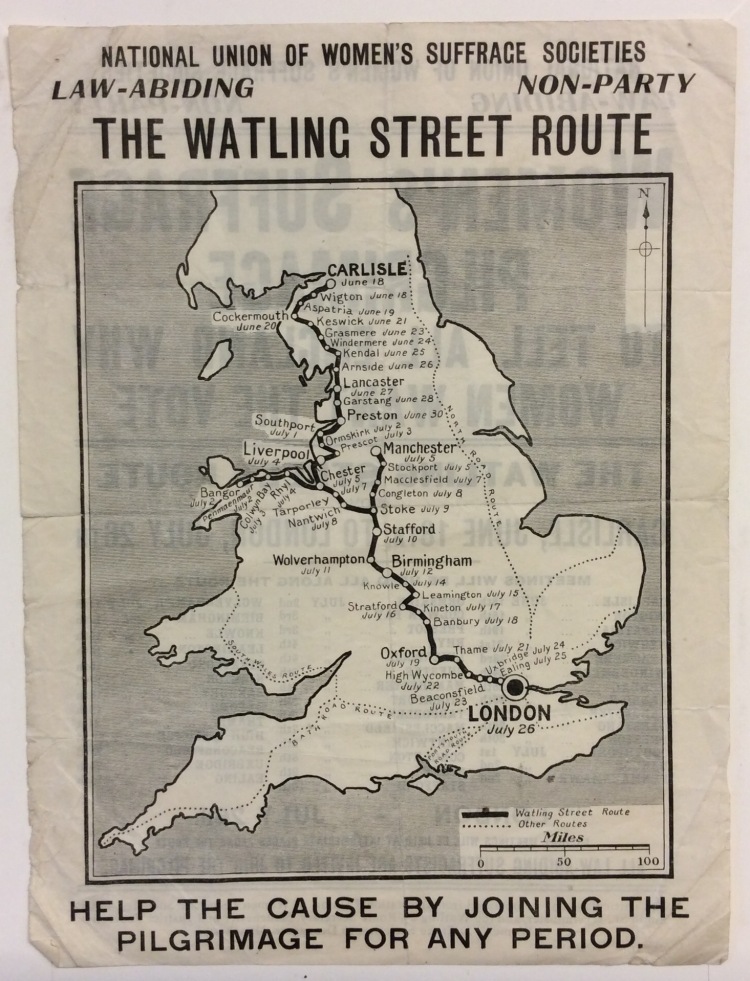